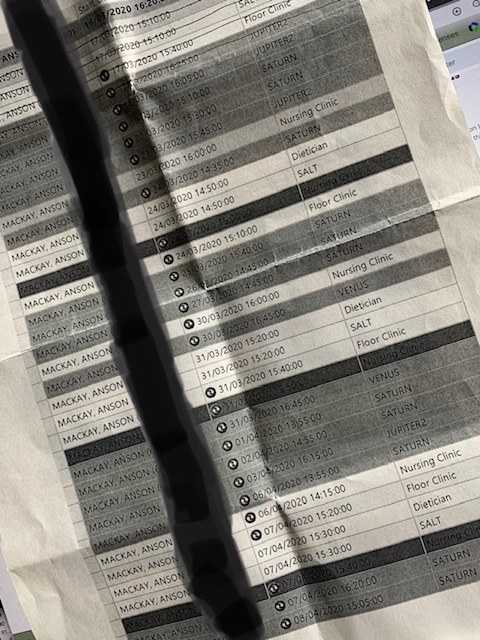 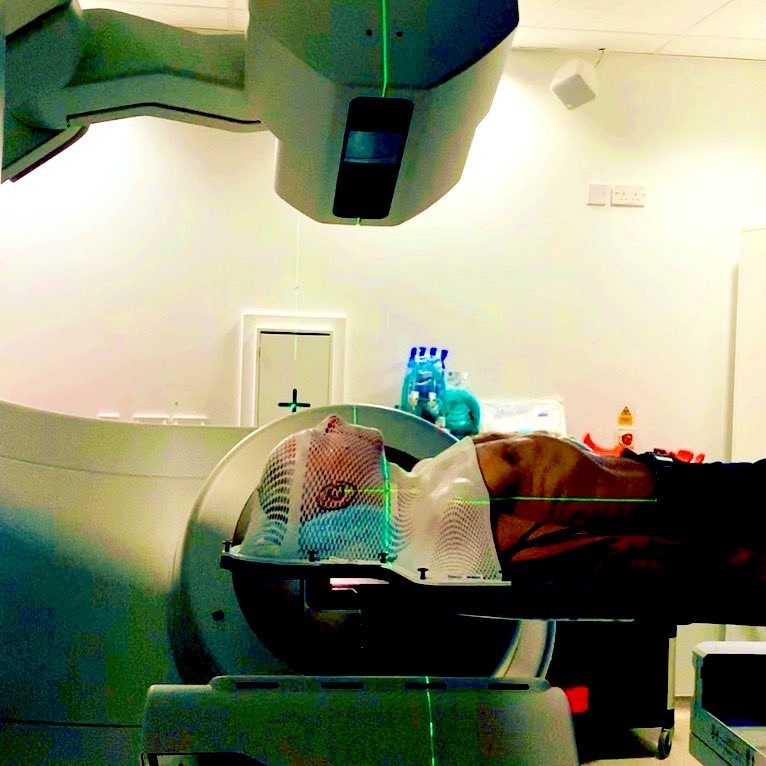 At last I'm at the start line of 7 weeks of concurrent chemoradiation therapy (CRT), and unsurprisingly nothing is how I imagined it to be. I'm timetabled to have radiation therapy every afternoon at Barts (Monday - Friday), but one look at my treatment schedule shows that some afternoons are packed full of other meetings. So while this is quite a long post, it definitely helps me understand more what I am doing and why!!

Radiation therapy is done using one of 5 dedicated linear accelerator machines (LINAC) at Barts, each with a planetary moniker: MERCURY2, VENUS, MARS, JUPITER2, SATURN. Prior to treatment, the LINAC is programmed to deliver a series of high-energy X-rays that is unique to the location, size and shape of the tumour being targeted, designed so that there is as little exposure as possible to surrounding healthy tissues. To aid accurate delivery of the X-rays, my fitted mask is *exceedingly* snug; so much so that at first I almost couldn't breathe. Lots of people really don't like this procedure and find it makes them panic. Weirdly I've fallen asleep three times now; there's something about the hypnotic whir of the machines as they function that makes me feel like I'm in a high-tec sci-fi movie. This feels weirdly comforting and assures me that I'm in good hands. David managed to get a great short video as they tested it out beforehand.

Every Tuesday there are a set of three other meetings before radiation therapy, and to prepare for the chemo on the following Thursday. At these meetings, you sit in a waiting room with other patients waiting to be called to see (in no particular order)

The chemotherapy results in the decline in your blood cells, which obviously puts one at huge risk of infections (especially during the COVID-19 pandemic), feeling breathless, and excess bleeding. So blood tests are done prior to Thursday's chemo to check that the number of blood cells are above certain limits, and to check liver and kidney function too. For example, in my first report above, the WBC are white blood cells that fight infection, including neutrophils (NEUT). Red blood cells (HB) carry oxygen around your body, while the platelets (PLT) clot your blood. And what was especially useful is the list of potential side effects that are traffic-light coded, depending on their severity, and these are to be especially watched out for the couple of days after receiving the chemotherapy.

And I should add that one of the nice things about waiting with the other patients all to be seen, is that we chatted loads about how we were all getting on with our treatments, good and bad, and that builds a degree of camaraderie, as I've found that I keep meeting these people while we wait for radiotherapy every afternoon. And because we are all at different stages of the chemoradiation therapy, I at least have begun to build up a better picture of what to expect in the future.

But what was making me most anxious this week was starting the chemotherapy, which I need to have every Thursday morning. I was completely unaware of what to expect, how badly the drugs would affect me etc., certainly in terms of nausea. But I had a really good meeting with one of the oncologist nurses on the Wednesday beforehand (prior to today's x-ray zaps), and she went through the process really clearly as to what would happen in the treatment ward, what the various medicines delivered to me would be, and what the risks I needed to take to minimise risk of infection afterwards (see gave me a booklet called Your Cancer Treatment Record (which I provide a snapshot above) that is a record of your changing results and side effects after every treatment.

On the Thursday morning, I signed in on the 7th floor oncology wards at Barts. I should add in here that all the London hospitals are now on Pandemic Alert due to COVID-19. This means that security is really tight, entry to the hospital is restricted, and before entering the hospital and again the oncology ward, hands were be sterilized and body temperatures taken to ensure that no one enters with a fever. Once you sign in, doctors release the medication that you are allocated, and I was then called into the ward, which consisted of many reclining chairs lined up in rows. Being first in, I grabbed a chair with a view 😃. 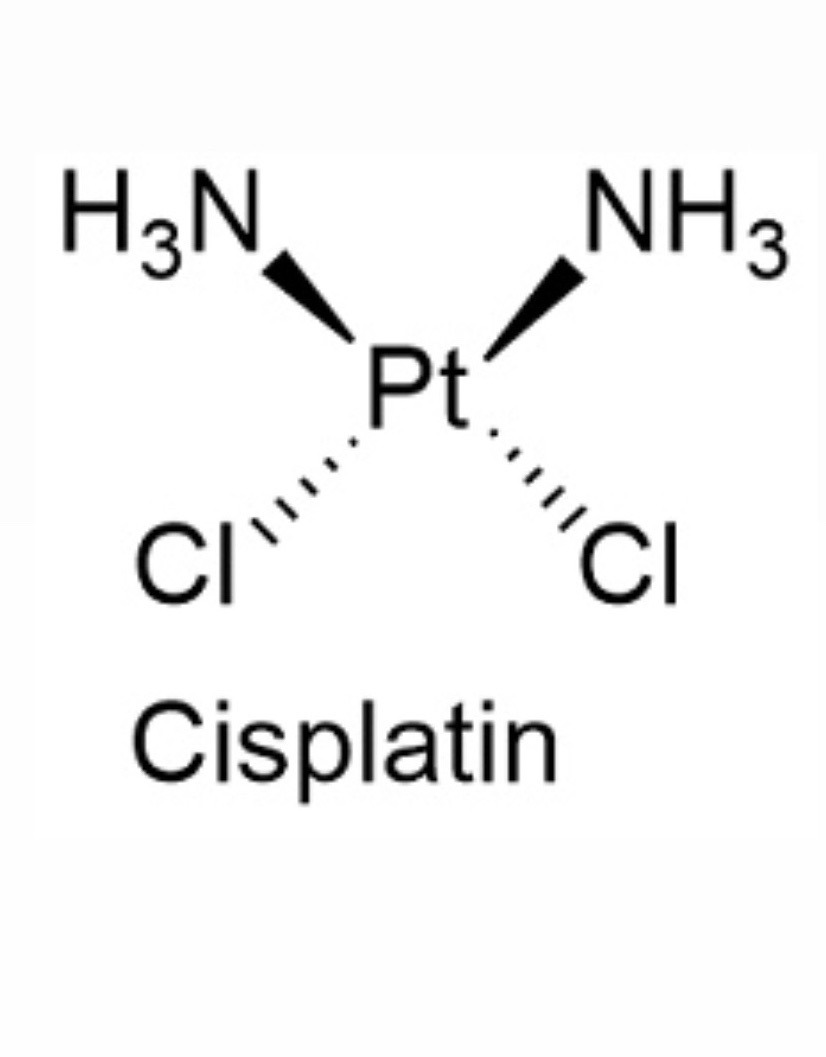 It took a fairly long time to get set up; I'd never realised that, before the chemodrug cisplatin is even administered, it's extremely important to get your body hydrated first. The fluids I received are one variation on a protocol established by research on how to deliver chemodrugs as effectively as possible. For my cancer, it went like this:

Each of these deliveries is really important. Extensive research has shown that hydration is essential for all patients to prevent cisplatin‐induced nephrotoxicity. Cisplatin (or to give it its full name: (cis‐diamminedichloroplatinum [II]; CDDP; Platinol)) is a platinum-based drug that impedes mitosis in fast-dividing cells (e.g. cancer cells) through disruption of the cell's DNA. This causes cells to auto-degrade, and hence die off. However, it also causes nephrotoxicity, or damage to the kidneys, which is why the initial kidney tests were done last week, and which is why you are hydrated during the drug delivery process, so that the cisplatin does not build up to high concentrations in the kidneys, and you soon start to pee it out. Studies have also shown that the magnesium supplementation may have a role as a nephroprotectant.

The whole delivery of the fluids and the cisplatin took about 3-4 hours, during which time I just sat on my reclining chair, reading and actually doing some live tweeting of the processes! Oh, and during this time, a tea-lady came round and gave us all a free lunch, including ice cream, which was a definite highlight!

Once finished in the chemoward, I then went straight downstairs to the radiation therapy rooms, where I was seen almost immediately on the JUPITER2 LINAC for the x-ray zaps!

One completely unexpected surprise from the chemotherapy treatment in the morning was the effect of the steroids; on leaving the hospital I found that I had loads of energy, and ended up doing a brisk walk of just over 5k to Bethnal Green!

And then the evening. This for me was the most worrying time. How would I react to the cisplatin? Nausea is the norm, which can translate into violent vomiting, hence that evenings preparations - see mop bucket by bed below! But thankfully, I just remained nauseous and took all the medication prescribed to leave it at that. Always listen to the experts!!

And then on Friday morning, a nurse from the company Nutricia came to check up on me, to make sure that the PEG tube was not infected, and that I was cleaning it OK. David and I are clearly both doing something right, as all was looking good with our nightly cleaning of where the tube enters the stomach, and the flushing of the tube with sterile water. She also explained to me why the stitches were so sore - and it's because there are two buttons on either side of the tube which cause tension, but hold the tube in place until the stomach wall heals over it. Thankfully these sutures will be taken out next week, which should mean I can get back to doing some proper exercise, for as long as the tiredness fails to take hold.

Then on Friday afternoon, I had my my final radiation treatment, and that's it for the week, leaving the weekend free to recover.

Well today was a bit more relaxing, Diligently I took my domperidone and dexamethasone in the morning, and David and I went out for 6.5km stroll to one of or favourite cafes, Tromsø in Forest Gate to pick up some of their homemade cinnamon buns. Tromsø, with the ban on sitting in cafes ordered last night by the Government to increase social distancing, have turned themselves into a take away. And a very successful one at that! 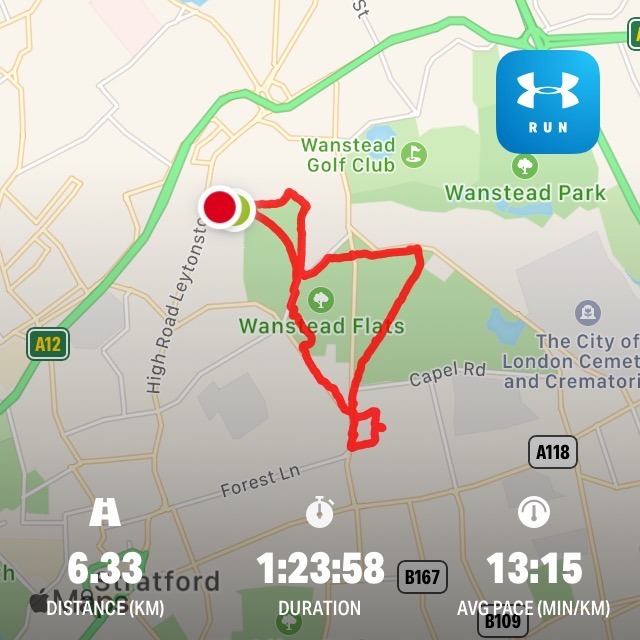